Odyssey brings a space-age look to the Golden Mile 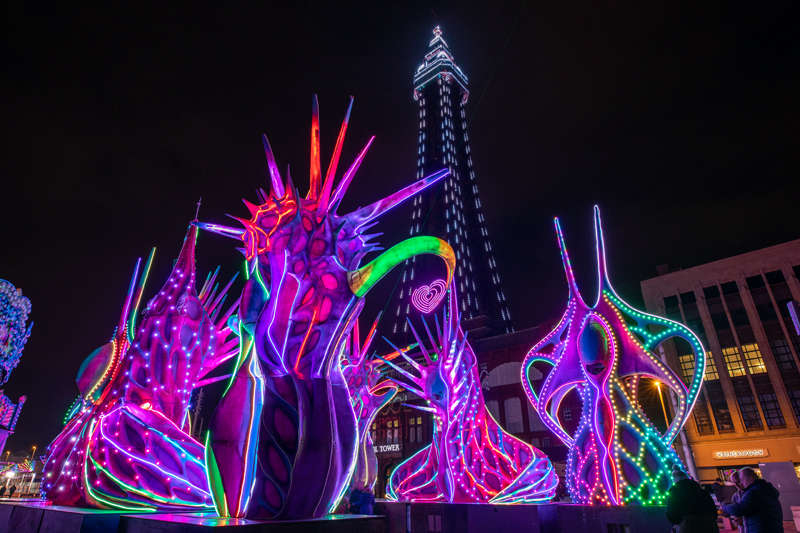 The biggest standalone light installation ever created for Blackpool Illuminations has brought a futuristic feel to the famous Golden Mile.

Standing at 11 metres high, Odyssey is a spectacular interactive display that has been co-created by international designer Jack Irving in collaboration with a highly-talented team of computer scientists from Lancaster University.

The outdoor installation comprises six large-scale towers that are combined with state-of-the-art technology to create an immersive projection show themed on undiscovered creatures lurking in the depths of the deep sea.

Odyssey, which has been manufactured at the Blackpool Illuminations Lightworks factory, has taken more than two years to design and build.

The installation provides an extraordinary interactive experience for visitors as they discover alien sea creatures swimming and swirling around their feet.

Through advanced technology, no two experiences are the same as the projector maps individual movements and reflects back a customised projection, creating a unique and dynamic encounter for each person. The Odyssey towers incorporate 60 powerful lasers and a dramatic sound and light show.

The creation of Odyssey has been assisted by the investment that Blackpool Council has received from the Towns Fund, which is aimed at rejuvenating the Illuminations and developing new concepts that will attract new generations of visitors.

Situated on the Tower Festival Headland, alongside this year’s Christmas By The Sea village, the free attraction will remain in place throughout the extended Illuminations season which ends on January 2, 2023.

Cllr Lynn Williams, Leader of Blackpool Council said: "The introduction of Odyssey on to the Promenade has created yet another wow factor and we were thrilled to see it get a starring role in one of the fabulous dance routines in the Blackpool edition of Strictly. "The installation is the result of a brilliant collaboration with our partners and adds a completely new dimension to the Golden Mile".

Jack Irving, Artist said: "It's amazing to showcase Odyssey to Blackpool - We've spent over 2 and half years developing the project and created a totally immersive world. All inspired by my greatest inspiration which is deep sea life. I really want to take the viewers of Blackpool into the deep and immerse them in the alien world we've created. There are so many magical elements to the piece and it's a futuristic story of the deep sea creatures told through the power of light".

Joe Finney, Professor of Computer Science at Lancaster University said: "We are thrilled to have worked with the Blackpool Illuminations team and Jack Irving in creating Odyssey. Lancaster University is committed to engaging actively with our partners as a force for societal good at regional, national and international levels.

‘’Through Odyssey, the most technologically advanced art installation ever deployed by Blackpool Illuminations, we aim to instil a new paradigm of interactivity into the illuminations, allowing visitors to not only see the lights, but to feel a part of it".